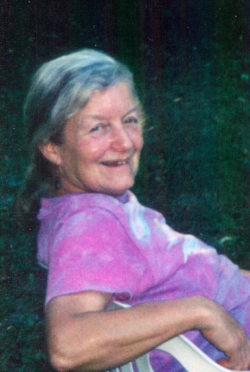 Nancy Scharfe Suci, 92, died peacefully at home on November 21, 2021. She was born in Milwaukee, Wisconsin on September 23, 1929 to Dorothy Reinhart and Siegfried Scharfe, but she knew Lester Reinhart to be her dad and he was Grandpa Les to the kids. She received a BA in psychology from Champaign-Urbana, Illinois. While she was married to George Suci, they moved to Ithaca with the four kids in 1959. Both children of the depression, they raised us with great respect for furthering analytical thought, philosophy and education , but also with countless examples of self sufficiency. She knit us sweaters, mittens, sewed shirts from scratch. We had gardens with wide variety, some of which became pickles, dilly-beans, tomato juice and ketchup. We had lamb roasts and more than once, 35 whole heads of cabbage turning into sauerkraut in a barrel in the cellar. After raising the kids she and George were divorced, but remained friends. Nancy worked at ILR at Cornell with the old boxfuls of punchcards to program the computers. she went back to school for her Nurse’s license and worked at the Tompkins County Hospital on a surgical floor and then the mental health floor for 25 years until her retirement in 1998. She was a great outdoors lover. Camping, cross-country skiing, and hiking were a regular occurrence, especially with her daughter, Emily. They also took a few cross country trips. She was a member of the Adirondack Mountain Club, and its treasurer for ten years She was a great listener and could discuss mathematics, science and philosophy with an analytical mind and indomitable spirit. Nancy participated in our democracy and dearly wanted it to function for the improvement for all. She is survived by her children Peter Suci of Bozeman, Montana (his sons Aron and Lester); Eric Suci, MIchael Suci (Tatiana Stanton, son Abel), and Emily Suci, of Ithaca. Three sisters: Leslie (and George) Male, Marta (and Bruce) Bloy, and Susan Reinhart. She was predeceased by their brother Rick Reinhart.

Don’t accept “no” until you have to and then move forward. Donations could be made towards research into Altzheimer’s. A memorial will be arranged at a future date.

x101_wxhc
•
Follow
Getting in on the ten year challenge. We can all relate! #TenYearChallenge #AlwaysClassic
View on Instagram |
1/20

x101_wxhc
•
Follow
Shoutout to all our listeners who are Bills fans!! Good luck tonight. What’s gonna be the final score? #BuffaloBills
View on Instagram |
2/20

x101_wxhc
•
Follow
The NFL announces the death of Hall of Fame coach and legendary broadcaster John Madden. He was 85. RIP Madden. #Madden
View on Instagram |
8/20

x101_wxhc
•
Follow
Our Holiday Music Marathon, presented by Visions Federal Credit Union starts on Christmas eve at 6 am and continues commercial free until 6 pm on Christmas Day. Thanks to all our sponsors on wxhc.com. #HolidayMusicMarathon #HappyHolidays #AlwaysClassic
View on Instagram |
10/20

x101_wxhc
•
Follow
Peevey wanted a hippo for Xmas, we got a camel. Thanks to Achoo for visiting us and Homer today!!! #Camel #AlwaysClassic #HomerNY #MerryChristmas
View on Instagram |
12/20

x101_wxhc
•
Follow
We wrapped up our Turkey-A-Day Giveaway yesterday with @cortlandproduce. Congrats to all the winners. And when they won @catholiccharitiesofcortland received 5 donated turkeys, courtesy of CP Cash & Carry. Pictured here is VP Mike Eves picking up the birds and delivering to the food pantry. #TurkeyGiveAway #CatholicCharities
View on Instagram |
16/20

x101_wxhc
•
Follow
When you shop local money spent here, stays here! These are just a few of the great local businesses in Cortland. #ShopLocal #SmallBiz #MyCortland
View on Instagram |
17/20