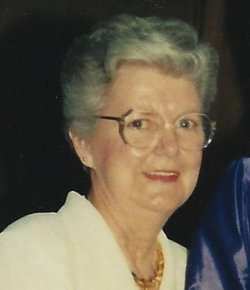 Age 94, died peacefully in her sleep at Cayuga Medical Center on December 19, 2021, in Ithaca, NY following a courageous battle with COPD and pneumonia.

Chris was born on September 27, 1927, to parents Helen (Dorothy) and Harlow J. Stettner. She was the third child in a family of four sisters (Connie, Joan, Shirley, Donna) and one brother (Alan). The family initially grew up on a farm in Ogden, NY well known for commercially growing flowers for all occasions. When Chris was in grade school, the family moved to their new home in Spencerport, NY.

Most remember our mother as a friendly, caring, and lovable woman who also appreciated a clever joke. She touched many lives with her generosity. Chris also loved a good card or word game, jigsaw and crossword puzzles, and being with family and friends.

Recently, our mother surprised us with an interesting anecdote about her past. During WWII, to get out of high school early, she took up a roll as Plane Spotter. Later, she packed wadding in munitions for the war effort.

Following graduation, Chris attended Brockport State teacher’s college, then worked at Eastman Kodak for several years. In 1966 she began working as Transportation Assistant for the Spencerport Central School system where she remained until her retirement in 1983.

She married her Marine and life partner, Arthur (Bud) Buttner, in 1946. In 1958 they moved to their first home on the corner of Union Street and Maplewood Ave in Spencerport, NY.

Chris was a congregant of the White Church (Congregational) in Spencerport and a member of the Order of the Eastern Star.

Following her husband’s passing in 1983, “The Sisters” (Chris and Joan Knox) continued to live in Spencerport until Joan’s passing in 2017. Chris later moved to Freeville, NY to be close to her sons.

The family would like to thank the nurses and physicians at CMC for their kind, compassionate and professional attention to mother through her transformation.

Chris will be interred with her husband in Spencerport in the summer of 2022 with a small gathering of her family and friends at the gravesite.

In lieu of flowers, the family requests that donations be made to the ASPCA of Tompkins County or the American Cancer Society.

x101_wxhc
•
Follow
Getting in on the ten year challenge. We can all relate! #TenYearChallenge #AlwaysClassic
View on Instagram |
1/20

x101_wxhc
•
Follow
Shoutout to all our listeners who are Bills fans!! Good luck tonight. What’s gonna be the final score? #BuffaloBills
View on Instagram |
2/20

x101_wxhc
•
Follow
The NFL announces the death of Hall of Fame coach and legendary broadcaster John Madden. He was 85. RIP Madden. #Madden
View on Instagram |
8/20

x101_wxhc
•
Follow
Our Holiday Music Marathon, presented by Visions Federal Credit Union starts on Christmas eve at 6 am and continues commercial free until 6 pm on Christmas Day. Thanks to all our sponsors on wxhc.com. #HolidayMusicMarathon #HappyHolidays #AlwaysClassic
View on Instagram |
10/20

x101_wxhc
•
Follow
Peevey wanted a hippo for Xmas, we got a camel. Thanks to Achoo for visiting us and Homer today!!! #Camel #AlwaysClassic #HomerNY #MerryChristmas
View on Instagram |
12/20

x101_wxhc
•
Follow
We wrapped up our Turkey-A-Day Giveaway yesterday with @cortlandproduce. Congrats to all the winners. And when they won @catholiccharitiesofcortland received 5 donated turkeys, courtesy of CP Cash & Carry. Pictured here is VP Mike Eves picking up the birds and delivering to the food pantry. #TurkeyGiveAway #CatholicCharities
View on Instagram |
16/20

x101_wxhc
•
Follow
When you shop local money spent here, stays here! These are just a few of the great local businesses in Cortland. #ShopLocal #SmallBiz #MyCortland
View on Instagram |
17/20